Start a Wiki
Wolfpack, commanded by Clone trooper Commander Wolffe and Jedi General Plo Koon, is a well known and close-knit Clone Trooper squad in the Clone Wars. Wolfpack, so far, makes their appearance on Iceberg Three and as a special ability in Republic Defender, which can be unlocked after completing Mission on Iceberg Three. 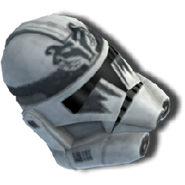 Wolfpack's emblem
Add a photo to this gallery

"Everyone will see you waving from great heights with this jetpack!"

The Wolfpack Rocket Jetpack armor is a one-piece gear set. Is a standard Wolfpack trooper with a jetpack. The cost is 1800 Credits.

Wolfpack Jetpack
Add a photo to this gallery

Retrieved from "https://cwa.fandom.com/wiki/Wolfpack?oldid=19804"
Community content is available under CC-BY-SA unless otherwise noted.