Umbara was the first combat zone to be added to Clone Wars Adventures, allowing open-world PvE for the first time. It is set on the planet Umbara, and players can use their own character and weapons to fight against the Confederacy of Independent Systems' army and the Umbaran forces. There are several mini-games in the area (in the same format as the combat zone) in which players have single player or multiplayer options. They must run around each location on the map.

The CIS Landing Zone is an area where Separatist C-9979 landing crafts can land to drop off droids and vehicles on Umbara. There are two landing zones (Aurek and Besh) that allow this. Once the craft lands, players in the area are tasked against waves of B1 Battle Droids and B2 Super Battle Droids, as well as Dwarf Spider Droids, AATs, and a Hailfire Droid. This mission introduces the AAT and Hailfire Tank Droid to the combat zone. After the craft is destroyed via air support, the Enemy Credit Reward x2 Modifier is granted to every player in the area of the Landing Zone. The Zones were released in the 27 January 2012 update. The zones were the second extra zones in the combat zones (the first being the pirates).

Trandoshan Pirates appear south east of the air base in a small valley that includes a small outpost with their leader, Captain Dheeb, in a small courtyard past the main group. Since the 13 January 2012 update, the two Trandoshans that guard Captain Dheeb were given the names Sarkh and Grahssk. 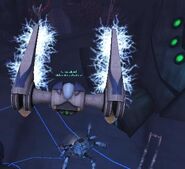 Inside the Republic Outpost

The Main Road of Umbara

Fives of the 501st Legion launching the Airfield Mission

Add a photo to this gallery

Retrieved from "https://cwa.fandom.com/wiki/Umbara?oldid=23993"
Community content is available under CC-BY-SA unless otherwise noted.