Obi-Wan Kenobi is a dedicated and legendary Jedi Knight, and has had a long and tumultuous career that has helped shape the fate of an entire galaxy. When he was 25-years-old and still a Padawan learner apprenticed to the Jedi Master Qui-Gon Jinn, he was caught up in the important events of the Battle of Naboo. When Jinn died at the hands of Darth Maul, Kenobi took Anakin Skywalker as his apprentice, as a final request from his late master. After the outbreak of the Clone Wars, he became one of the most famous Jedi generals, and for his work, was made a Jedi Master and given a seat on the Jedi High Council.

Kenobi is the rank two unit produced at the Republic Command Post in Galactic Forces. He uses his lightsaber and the Force to attack and damage up to four units at a time.

After many skirmishes, Obi-Wan Kenobi returns to his Jedi roots with these more traditional, less battle-ready robes.

Loosely modeled after the uniform of the Clone Troopers he valiantly commands for the Republic, this is the battle armor of the bold Jedi General Obi-Wan Kenobi.

As a diplomat, a Jedi may have to travel to an oceanic system. These robes, styled after Obi-Wan Kenobi, can help you blend in among watery styles!

Aquatic Obi-Wan Kenobi was released on 18 June 2011. It follows the same outfit design of the standard Obi-Wan Kenobi outfit, but is coloured several shades of blue. This outfit is unique to the game as it does not appear in any episodes.

With this gear you can blend in on any forest world, or stand out pretty much anywhere else.

In these robes, you can channel Obi-Wan Kenobi's fierce loyalty to helping the Jedi Order bring peace to the galaxy!

This set that was released on 30 July 2011. It follows the same design as the standard Obi-Wan Kenobi outfit, but is colored red. This outfit is unique to the game as it does not appear in any episodes.

Get into the spirit of giving in this ho-ho-holiday themed outfit.

This outfit was added for Life Day 2011, and is a recolour of Obi-Wan's standard outfit to resemble Father Christmas. It was also the fourth item given to players with the season pass or lifetime membership.

A Jedi must always rely on their skills, but the right robes can help with blending in, especially in a forest world like Kashyyyk!

Kashyyyk Obi-Wan Kenobi is an outfit set that came out on 12 August 2011. It is based on the standard outfit, but has unique a red and yellow design. This was the first Obi-Wan outfit that had to be bought with Station Cash. 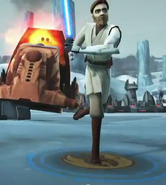 Obi-Wan as he appears in Galactic Forces

Add a photo to this gallery

Retrieved from "https://cwa.fandom.com/wiki/Obi-Wan_Kenobi?oldid=24811"
Community content is available under CC-BY-SA unless otherwise noted.